The chin plays a prominent role in facial aesthetics. When the chin is unbalanced in relation to the rest of the face it can create disharmony. A strong chin can convey a sense of masculinity. A weak chin that is set back can cause poor neck contours and premature aging. Genioplasty is frequently combined with other procedures such as an upper and lower jaw surgery where it helps improve neck contour and soften the transition from the jowl to chin. It is also often combined with rhinoplasty when the nose appears too strong in relation to the chin. Dr. Khan’s unique background as a maxillofacial surgeon allows him special expertise when reshaping the facial skeleton. The procedure is typically performed under general anesthesia and takes approximately an hour and a half.

Had sliding genioplasty at About Face and it was an excellent choice! My local cosmetic surgeon was not able to perform this, so I called around tri-state offices and was surprised, Dr. Khan is the only one in the area who not only offers this but has numerous fantastic reviews as well. Very reasonable pricing. The office, staff and procedure were professional and pleasant. I’d highly recommend Dr. Khan, who is a perfectionist and very skilled at what he does!

Augmentation genioplasty or increasing the size of the chin is typically performed with a silicon implant or making a cut through the bone and sliding the chin forward.
If a silicon implant is used, this is most often a custom implant. A small incision is placed under the chin in a nonvisible area. The implant is then placed through this and sits on top of your existing bone. If the implant needs removal or a size change it can easily be done through this approach at a later date, making the procedure completely reversible.

Reduction genioplasty is performed with an incision through the mouth and typically involves making a cut through the bone and either sliding the chin back or removing a portion of the chin. The chin bone is then secured in place by using plates and screws. The above approach of actually cutting and moving the bone can also be used in place of a silicon implant.

Social downtime is typically 7 days. Tape remains on the chin after the operation for approximately 3-5 days. Sutures are removed at 7 days if an incision was made under the chin. If it was made inside the mouth the sutures dissolve on their own. For the first 4-6 six weeks movement of the chin muscles and sensation of the lip may be diminished.

Schedule Now
Before & After 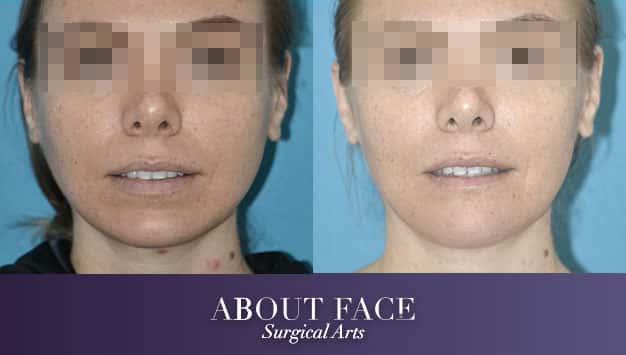